The modern plastic wings of gliders or ultralights are assembled to scale. The wing consists of an upper and lower component of the scale. The scale components are often assembled as a sandwich construction: an upper and lower laminate of fibre-reinforced plastics with a light filler in between as core material (e.g. polyurethane foam). Glass or carbon fabrics are most often used as fibres in the laminate and are positioned at an angle of 45° in the skin, so that the closed scale construction offers the wing optimal torsion rigidity.

In the short film below, a strength test is carried out on a carbon-reinforced wing of an ultralight.

A modern development is the use of pultruded carbon rods or strips as purlin material. The carbon profiles are directly laminated in between the other fibre layers of the skins or web plates. The most important advantage is the very high and reliable quality of the DPP pultrusion profiles. Moreover, it saves a great deal of manufacturing time, as laminating the unidirectional fibres by hand is very labour intensive. 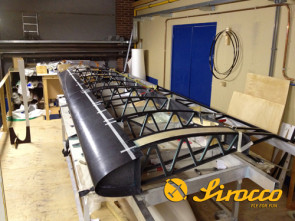 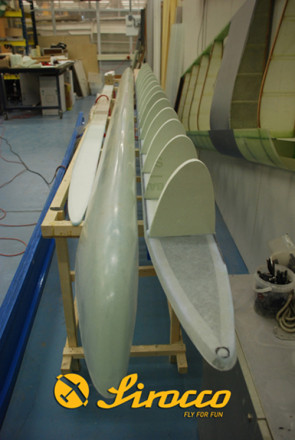